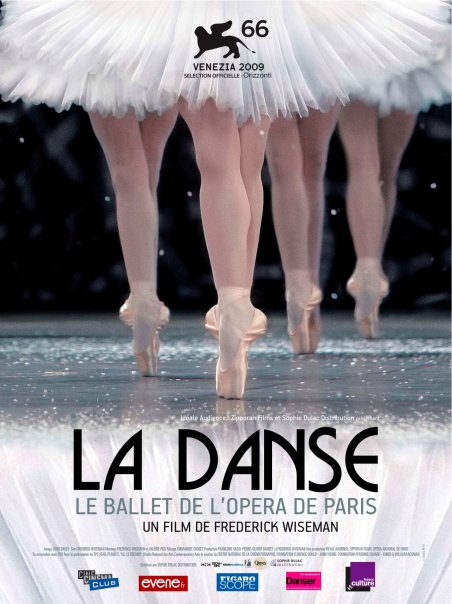 So here’s a fact: documentary films are not true to life.

Yes, they are supposed to be nonfiction films, “documenting” the lives of the people who are their subjects.  But, in actuality, they are manipulations of the truth, based on the perspective, vision, and, in some cases, biases of the producer (see Michael Moore).

Even those documentaries that clearly don’t have the Michael Moore slant on things are still creations of the filmmaker who must make choices about what to show and what not to show, often with the idea of telling the story in a more powerful or compelling way.

Telling a compelling narrative is of little importance to Frederick Wiseman, the director of La Danse: The Paris Opera Ballet.  His work more resembles that of an anthropologist – the main idea is to literally document the lives of his subjects.  In La Danse, he reveals the functioning of the Parisian dance company, showing the rehearsals, administrative meetings, and artistic conversations that happen backstage, in addition to its performances.

The frustration for those expecting to be told a story will be that, instead, they are watching what appear to be a series of rather mundane activities with no narrative arc whatsoever.  And it feels as if the film has no real beginning and no real end.  We abruptly enter, along with Wiseman and his camera, the lives of the company members and just as abruptly depart.

To appreciate the film, therefore, the viewer must watch it with a different set of expectations.  Rather than waiting to be told a story, it’s engaging with the film moment to moment.  The moments that are most compelling to watch are the rehearsals, which make you understand that no matter how naturally talented or gifted an artist might be, he or she must still work to achieve success.

And that work, in many cases, can be tedious.  Dancers repeat jumps over and over, instructors tell them to swing their arms “this way, not that way,” and the movements between dance partners are studied, modified, studied some more, and changed again.

All this work also makes you realize that the definition of artistic achievement is clearly a subjective one and, for the professional artist, has a whole different meaning than it does for the rest of us.  For the unpracticed eye, the differences from one movement to the next are nearly impossible to see, and we think to ourselves: “Gosh, I thought the first version of that dance was awfully beautiful; I don’t see why the improved version is that much better!”

But even if we don’t understand totally what’s going on, immersing ourselves for two and a half hours in Wiseman’s film still leaves us with an appreciation for the dedication all of the members of the company – the dancers, artistic directors, choreographers, and administrators – have for their work.