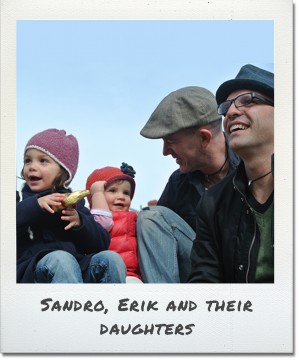 The Boston International Film Festival was held in April and presented the New England premiere of The Guys Next Door. The documentary is the story of family:

We interviewed Allie Humenuk, who was co-director/producer/director of photography for the film. Below are highlights from the conversation, edited down to be blog-friendly.

Q: How did this film come about?

My co-director, Amy Geller, had read an article about the unusual arrangement between Rachel, Erik and Sandro. Rachel was a college friend of Erik’s and she had volunteered to help Erik and Sandro build their family by serving as the surrogate mother to their children. Their first daughter was already born and their second, Eleonora, was on the way.

Amy had reached out to Rachel, Erik and Sandro and arranged to do some filming with them when she invited me to help out. Originally, I wasn’t totally committed because I thought it was going to be just a film about surrogacy, but I agreed to go to New York and do some filming for Amy anyway.

After I spent some time with Erik and Sandro, though, I really liked them! And I could see how the film could be one that was character-driven versus plot-driven. Making documentaries is so hard, and if I’m going to help produce one I have to feel really passionate about it. For me, I’m most passionate about documentaries that focus on character rather than subject.  Once Amy and I came to this understanding, we agreed to work together.

Q: Though it was character-driven, did you feel it had a larger message?

We definitely felt the film was timely. Though gay marriage and families are becoming more accepted, there are still a lot of people who are aren’t comfortable with it, particularly if it’s two men raising two daughters. From our perspective, there is no difference between a father and a mother except one can breast feed and the other can’t, so part of what we wanted to do was show that.

Interestingly, after watching the film, the response from many people is that they don’t even see this as a “gay” film. Instead, it they see it as one about a family dealing with day-to-day challenges and how they cope with that. We included some of the mundane things that happened with Erik and Sandro but resonate as family stuff – hectic schedules, laundry piling up, furniture breaking, babies throwing their food on the floor.

Our hope was that much of this would resonate as familiar, but also be funny. Humor is great for disarming people.

Q: What was hardest about making the film?

The biggest obstacle was raising money to make the film. We had to devote a lot of time to that, and this took us away from totally focusing on the film itself. I would have liked to have spent more time poring over the footage we captured because I think there were moments in there that might have been overlooked.

The other challenge was co-directing. Like I said before, I am more interested in character. Amy and our editor, Rachel Clark, are more academically-minded than me in their approach to filmmaking, so they were interested in topics. So we had to work pretty hard during editing to reach consensus, but we eventually completed a film that both of us are happy with and very proud of.

The Guys Next Door is next scheduled to show at the Provincetown International Film Festival. For information on screenings there and future ones at other venues, check out the screenings page or sign up to be notified by email.